The discovery of Au and Ag-rich massive sulphides further supports the Eskay Creek volcanogenic model that is being employed at Nechako based on (a) the same type of host strata (vent-proximal mudstone, sulphide-pebble conglomerate and dacitic tuff-breccia) as at Eskay Creek; (b) an identical Au-Ag-As-Zn-Pb metal association; (c) a similarly high ratio of Ag to Au; and (d) most of the gold occurring within sulphide minerals rather than as visible grains.

The newly intersected massive sulphides occur along the contact between the dacitic tuff-breccia horizon and underlying basalt flows in an area where the contact is offset by synvolcanic growth faults. This contact is now thought to be the main source of the till-hosted Nechako Au-Ag-As-Zn-Pb dispersal train, with the April Trend making a smaller contribution. The Nechako dispersal train is equally as large as the train from Artemis' 8 million ounce Blackwater gold deposit (Fig. 4) and also contains three times more gold per till sample than the Blackwater train.

Hole 11 was collared 30 m behind Hole 10 (Fig. 2) and drilled in the same southwest section to undercut it by about 25 metres (Fig. 5). The hole appears to have intersected the Discovery Zone in a 6.4 m wide, mudstone-dominated interval between 74.9 and 81.3 m down-hole, within a 116.2 m wide (core length), siltstone-dominated horizon between strongly biotite-altered basalt flows. The mineralized zone was not recognized initially because the core was as badly broken as in Hole 10 despite having changed to a larger-diameter, HQ coring system to reduce breakage. However, two short sections with minor pyrite were analyzed and unexpectedly returned Au and Ag values similar to those in Hole 10 (0.4 m of 1.52 g/t Au and 18.7 g/t Ag, 0.6 m of 3.57 g/t Au and 67.4 g/t Ag, respectively) along with the usual associated As (1.3 and 2.6%), Zn (0.4 and 0.7%) and Pb (0.1 and 0.4%). Therefore the core from the rest of the 6.4 m section is being retrieved from field storage for cutting and analysis.

The segment of the Discovery Zone intersected in Holes 10 and 11 appears to dip flatly to the northeast at about 40꙳ (Fig. 5), possibly as a result structural displacement as significant faults were observed in both drill holes. Therefore the 7.1 and 6.4 m drill intercepts of the zone in these holes are close to true thickness. The host sediments, in contrast, appear to dip steeply to the southwest. Moreover, graded beds observed in the drill core from both the April Trend and dacitic tuff-breccia horizon consistently show the strata to face northeast, not southwest as previously thought, and thus to be structurally overturned. Being synvolcanic, the Au-Ag-As-Zn-Pb zones and associated biotitic hydrothermal alteration zone have also been folded and overturned.

A matching but thicker, southwest-facing and structurally upright dacitic tuff-breccia horizon was previously intersected 1 km to the northeast, indicating that the present drill area lies on the overturned southwest limb of a synclinal fold (Fig. 2). The axis of this fold roughly coincides with the C-Zone Cu deposit. The biotitic alteration zone that surrounds the Au-Ag-As-Zn-Pb zones is mostly limited to the southwest limb but does encompass the C-Zone, indicating that the Cu and Au-Ag-As-Zn-Pb mineralization are related, both genetically and temporally.

Hole 12 was collared on a section 50 m northwest along strike from Holes 10 and 11, as was Hole 9 of Tower's March drilling program. Both holes were drilled to the northeast at -45° and thus were subparallel to the Discovery Zone and appear to have overshot and undershot it, respectively.

The Discovery Zone is on Line 0+00 of the cut grid (Fig. 2) and the original plan for the drilling program was to drill systematically southeast along strike at 50 m intervals to Line 3+00E. However, four of 5 vertical reverse circulation (RC) holes drilled on Lines 1+00 and 2+00E immediately before the diamond program intersected porphyry that is known to postdate the Au-Ag-As-Zn-Pb mineralization. Therefore diamond drilling was limited to Line 3+00E where Holes 13 and 14 primarily targeted an inferred deep IP anomaly and encountered only minor mineralization.

Laboratory results received from the new RC drill holes after the diamond drilling was completed show that the till on Lines 1+00E and 2+00E is just as anomalous as that on Line 0+00, indicating that: (a) the four intercepts of post-mineralization porphyry must be from separate, small dykes rather than from a single, larger intrusion; and (b) the top of the Discovery Zone beneath the till has a strike length of at least 200 metres. This was confirmed by RC hole NRC20-93 on Line 2+00E which intersected pyritic siltstone rather than porphyry. A 3.6 m top-of-bedrock sample from the RC hole returned 1.7 g/t Au.

Holes 15 and 17 were drilled 100 m apart along the contact between the dacitic tuff-breccia and underlying basalt flows near the northwest end of April Pond (Fig. 2). Both holes were collared in basalt and drilled northeast toward the tuff-breccia horizon but only Hole 17 encountered tuff-breccia. Hole 15 remained in basalt to its terminus at 191 m, indicating that the contact between the two horizons is offset at least 100 metres.

The indicated offset is probably due to a fault that was intersected in the upper part of Hole 15. This fault is presumed to be a synvolcanic growth fault of the type found at caldera margins, e.g. at the large Rainy River gold mine in Ontario, because it appears to selectively offset the tuff-breccia horizon without affecting the underlying April Trend. As well, the tuff-breccia in Hole 17 exhibits chaotic facies changes from pyroclastic volcanics to epiclastic sediments and from subaerial to subaqueous deposits, features that record high relief in the depositional basin during volcanic eruption, another characteristic of calderas.

Being active during volcanism, growth faults tend to be the main conduits for upward flow of hydrothermal fluid and thus to have associated high-grade mineralized zones. The massive sulphide horizon in Hole 15 that assayed 4.0 g/t Au and 34.1 g/t Ag (Fig. 3) lies between basalt flows and is interpreted to have been deposited between a pair of growth faults (Fig. 2). The basalt for 30 m stratigraphically above (structurally below) the massive sulphides is highly fractured and cut at irregular intervals by cm-scale quartz veinlets mineralized with coarse-grained arsenopyrite. Sporadic anomalous assays up to 1.5 g/t Au and 14 g/t Ag over 0.3 m intervals were obtained from this 30 m fracture zone.

Hole 16 was drilled 600 m northwest along strike from Hole 15. It was collared on the dacitic tuff-breccia horizon near Hole 7, which in Tower's March drilling program intersected zones of pyrite-arsenopyrite-sphalerite veining that assayed up to 3.92 g/t Au and 152 g/t Ag over 0.4 metres, but was oriented northeast rather than southwest. It appears to have been on the opposite side of a set of growth faults that offset the tuff-breccia horizon approximately 100 m (Fig. 2) as it did not intersect any significant mineralization.

A narrow, ~50 m wide, but exceptionally strong Au-Ag-As-Zn-Pb dispersal train, separate from the main Nechako train (Fig. 4), emanates from the growth faults, suggesting that the faults were conduits for focused hydrothermal fluid flow and enclose a zone of high-grade Au-Ag mineralization. Drill holes in this area should be rotated 90° to squarely cross the fault zone rather than the strata.

At a cost of less than $300,000, the recent diamond drilling program at Nechako not only identified the down-dip extension of the Discovery Zone and intersected higher-grade Au-Ag mineralization in a new massive sulphide horizon near April Pond but also revealed key stratigraphic and structural relationships that are expected to further improve the efficiency and discovery rate of future drilling programs. Having this information is critical due to a total absence of outcrops on the property.

Of particular importance now is knowing that: (a) the originally subhorizontal, sediment-hosted, Eskay-Creek-type Au-Ag-As-Zn-Pb mineralized zones and cross-cutting, originally subvertical, biotite-altered hydrothermal alteration pipe have been folded upward more than 90° and thus are now overturned with their tops to the northeast; (b) the mineralization and alteration appear to be related to caldera collapse, with fluid flow focused up grow faults such that the highest grade Au-Ag zones occur within or near these faults; (c) the Discovery Zone dips flatly to the east rather than steeply to the west and is exposed beneath the till for at least 200 m southeast along strike from Holes 10 and 11; and (d) the Au-Ag-As-Zn-Pb zones and C-Zone Cu deposit are enclosed by the same biotitic alteration zone and thus are related both genetically and temporally.

Going forward, the exploration focus at Nechako will be entirely on diamond drilling as sufficient targets have been developed that additional RC drilling is not required. The most immediate requirements are:

The diamond drill holes were logged by Dane Bridge, MSc, P.Geo. Split samples of the drill core, generally 1-2 m in length, were prepared at Tower's core logging facility at Tatelkuz Ranch near the Nechako property. Each sample was then prepared for analysis and analyzed at Activation Laboratories (ActLabs) in Kamloops, BC, a laboratory certified as ISO/IEC 17025 Accredited (Lab 790) by the Standards Council of Canada. The samples were analyzed for gold by fire assay and ICP-OES and for 37 further elements, including Ag, As, Zn, Pb and Cu, by ICP-OES using a four-acid, near-total digestion. Over-limit (>5 g/t Au, >100 g/t Ag, >1% As, Zn or Cu, >0.5% Pb) analyses were repeated using the same procedures but at a higher detection range. QA/QC samples including blanks and standards were inserted regularly into the sample sequence at a ratio of approximately 1:15.

Tower is a Canadian based mineral exploration company focused on the discovery and advancement of economic mineral projects in the Americas. The Company's key exploration assets, both in B.C., are the Nechako gold-silver project near Artemis' Blackwater project and the Rabbit North copper-gold porphyry project located between the New Afton and Highland Valley Copper mines. 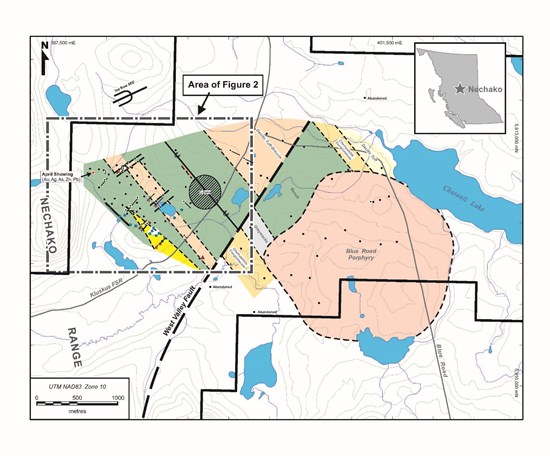 Figure 1 - Bedrock geology map of the west-central part of the Nechako property. The geology was determined entirely by drilling as the bedrock is completely covered by glacial deposits. See Figure 2 for legend. 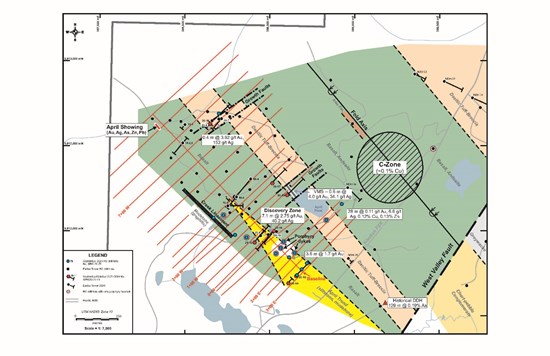 Figure 2 - Detail of the western part of Figure 1. Note the large area over which significant drill results are being obtained. 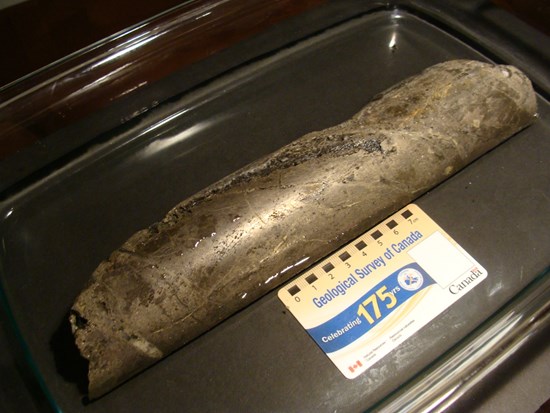 Figure 3 - Photograph of part of the massive sulphide section from Hole 15 that assayed 4.0 g/t Au and 34.1 g/t Ag. The sulphides consist mainly of pyrrhotite and pyrite with 2% arsenopyrite. 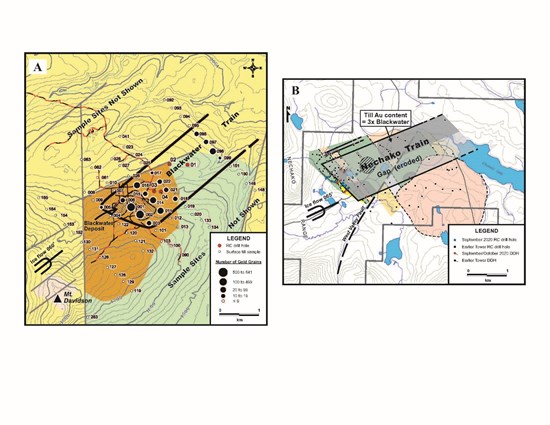 Figure 4 - Comparison of Tower's Nechako Au-Ag-As-Zn-Pb dispersal train and the dispersal train from Artemis' 8 million ounce Au deposit. Both maps are at the same scale. The two trains are the same size but the Au content of the till in the Nechako train is 3 times higher. The Blackwater train extends to surface but the Nechako train occurs in an older till horizon and was gapped by erosion during the last glaciation. 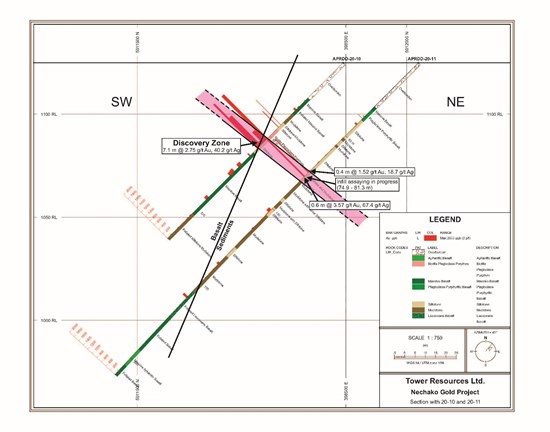 Figure 5 - Cross section through Holes 10 and 11 looking northwest. The flat dip of the Discovery Zone was unexpected when drilling Hole 11 and only short sections with visible pyrite were analyzed. The rest of the 6.4 m zone is now being cut and analyzed.

To view the source version of this press release, please visit https://www.newsfilecorp.com/release/70615