The April Trend is located at the head of a large (1.5 km wide x >3 km long), strong, Au-Ag-Zn-Pb-As glacial dispersal train in till (Fig. 2). Only seven other gold dispersal trains of this stature are known in Western Canada, of which six are associated with active gold mines and the seventh with the 8-million-ounce Blackwater gold deposit 30 km southwest of the Nechako property (Fig. 3).

The Nechako dispersal train contains the same suite of elements – Au, Ag, Zn, Pb and As – as the Eskay Creek Deposit in northern BC, the highest-grade Au-Ag deposit of its size ever mined in Canada (2.2 million tones @ 45 g/t gold and 2,224 g/t silver). Moreover, the ratio of Au and Ag to Zn, Pb and As in both the heavy mineral concentrates of the till samples and the discovery zone in Hole 10 (Table 1) is very high, suggesting that mineralized zones along the April Trend with only a few percent As, Zn and Pb sulphides may contain economic grades of gold and silver.

Tower’s new discovery was obtained after just 1000 m of diamond drilling along the new April Trend. The mineralized zone occurs within a siliceous, Eskay Creek-type siltstone-mudstone horizon atop an intense, 800 m wide x 500 m thick alteration pipe in the underlying basalt (Fig. 1). The immense size of this pipe reflects the unusually large scale of the hydrothermal alteration system that introduced the mineralization and attests to the high potential for economic gold-silver deposits along the April Trend.

Joe Dhami, President and CEO, commented: “Our Nechako property is located in one of lowest cost areas of BC and is accessible year round. We have strategically managed our work plans to utilize the experience and technical expertise of our team and now they will focus on expanding the Discovery zone and fully testing the exceptional gold-silver potential along the April Trend.”

Stu Averill, P.Geo., a Director of the Company, added: “Now that we have identified the fundamental controls on hydrothermal alteration and mineralization, we can make effective use of IP and ground magnetic surveys, in addition to RC drilling, to identify areas of sulphide enrichment even more efficiently and thereby accelerate the discovery and delineation of Au-Ag-Zn-Pb deposits along the April Trend.”

The Path to Discovery

Tower identified the tail of the Nechako Au-Ag-Zn-Pb-As dispersal train on the eastern part of the property in 2017 by RC drilling beneath a gold grain anomaly that the Company had outlined in a surface till heavy mineral survey the previous year (Fig. 2). The Au In the till heavy mineral concentrates was found to be sympathetic and proportional to As while Ag was sympathetic and proportional to Zn+Pb, and the ratio of Au and Ag to these associated metals, in g/t to percent, was very high at approximately 4:1 and 70:1, respectively, suggesting a high potential for a source of economic Au and Ag grades. While the gold grains at surface are clearly derived from the underlying dispersal train, the train itself is not exposed; it occurs at depths greater than 15-20 m within an older till horizon that was deposited by an earlier glaciation. Moreover, a large, 1 km gap is present in the middle of the train where the glacial deposits are thinner and the host till was completely eroded during the last glaciation.

Tower undertook two additional RC drilling campaigns further west across the gap in late 2018 and early 2019. These programs succeeded in both locating the stronger head of the train (Fig. 2) and intersecting highly altered bedrock beneath it (Fig. 1). An initial 6-hole, 630 m follow-up diamond drilling program was then undertaken in August, 2019.  Favourable mudstone and sulphide bearing conglomerate similar to those at Eskay Creek were intersected in the sixth hole, No. APR19-06 but the only significant mineralization was a 0.2 m wide sulphide vein grading 2.93 g/t Au, 34.3 g/t Ag, 5.45% Zn, 0.60% Pb and 0.23% As (see September 20, 2019, press release).

The total cost of the 2018-2019 RC and DD programs along the April Trend and the recent RC/DD discovery program was just $600,000 and only 1000 m of diamond drilling was required, illustrating both the low cost of exploring in the Nechako area and the efficiency of Tower’s exploration team.

The new gold-silver zone in DD hole No. APR20-10 is hosted by the same sediment horizon as and lies approximately 250 m southeast along strike from the mineralized vein that was previously intersected in APR19-06 (Fig. 1). Hole 10 was drilled to undercut one of the new RC drill holes, No. NRC20-74, which encountered 3 m of similar sediments with visible arsenopyrite immediately below the till.

The sediment horizon appears to be subvertical and its core thickness (all DD holes were drilled at -45꙳ whereas the RC holes were vertical) increases from <10 m at Hole 06 to ~30 m at Hole 10. The sediments consist of hard (siliceous), thinly laminated, black, grey and brick-red mudstone and siltstone with minor centimetric bands of paler, fine-grained sandstone. They are highly fractured, apparently by the same forces that made the underlying massive basalt permeable to the hydrothermal fluids that produced the alteration pipe. Consequently they are very blocky and difficult to core, commonly resulting in poor core recovery. The fractures tend to be lined with a mix of sulphide minerals that variably include pyrite, arsenopyrite, sphalerite and galena but neither pyrrhotite nor chalcopyrite.

Character and Importance of the Alteration Pipe

The alteration pipe that stratigraphically underlies the mineralized sediments is very large and the alteration is intense and visually conspicuous. However, the pipe was not recognized until the recent, 15-hole RC drilling program because it is completely covered by till and the earlier RC holes were more widely spaced.

The alteration is of the potassic type and has selectively affected the primary mafic (i.e. Fe and Mg-bearing) silicate minerals in the rock rather than the feldspar. Consequently it is best-developed in the basalt, the rock with the highest mafic mineral content (~50% augite). In the most-altered basalt intercepts, this augite has been completely replaced by a very fine-grained mixture of two other Fe-bearing minerals, biotite and pyrite (or locally pyrrhotite), plus silica (quartz), changing the colour of the basalt from dark green to brown (Fig. 4). Since biotite contains significant potassium and augite does not, the alteration reaction involved addition of this element from the hydrothermal fluid, raising the usual 1-2% K2O content of the basalt to 4-5%.

As basalt is normally a massive, impervious rock, pervasive preparatory fracturing was required to admit the fluid that that caused the alteration. This fracturing is visible throughout the green, unaltered basalt at centimetre to metre scale. The fracture surfaces tend to be coated with sheets of chlorite (Fig. 4a) that are commonly striated, indicating slippage and incipient brecciation. The fractures are oriented preferentially to the southeast parallel to the drill core, a situation that causes significant core breakage and loss. In the brown basalt within the alteration pipe, the alteration minerals have sealed these fractures (Fig. 4b), improving both drilling productivity and core recovery.

The alteration pipe appears to have originated at a stratiform breccia horizon, interpreted as the fluid reservoir, about 500 m below the mineralized sediments and to have propagated upward into a broad funnel (Fig. 1). Importantly, the most southwesterly RC drill holes show that the alteration extends across the mineralized sediments into another, overlying basalt horizon, suggesting that a second mineralized horizon is present along a parallel creek lineament ~150 m further to the southwest.

The stratiform breccia horizon below the alteration pipe was tentatively logged as dacitic breccia but is unlike any of the common volcaniclastic breccias and may itself be of hydrothermal origin. It thickens to the northwest into a “dome” in which the breccia has undergone brown biotitic alteration similar to that in the alteration pipe in the basalt and is variably mineralized with the same metals. A small Au-Ag-Zn-Pb-As dispersal train was intersected in RC holes drilled down-ice from this dome and north of the main dispersal train (Fig. 2). The first two diamond drill holes of the present program, Nos. APR20-07 and 08, were drilled on this dome (Fig. 1). The breccia in Hole 07 is broadly anomalous in Au and Ag, and a 0.4 m, sulphide-rich interval from 71.8 to 72.2 m returned 3.92 g/t Au, 152 g/t (4.4 oz/ton) Ag, 3.1% As and 4.9% Zn plus, unusually, 0.53% Cu but negligible (0.07%) Pb.

The April Trend is completely covered by thick glacial deposits and the buried till horizon that hosts the Nechako dispersal train was intersected in 8 of the 15 recent RC drill holes, mainly those closest to the mineralized sediments and thus of most exploration interest. The till samples from these holes have not yet been processed due to temporary closure of the ODM heavy mineral laboratory during the current COVID-19 epidemic, but will be tested before exploration resumes on the Nechako property.

No ground geophysical surveys have ever been performed along the April Trend. Tower now has sufficient knowledge, primarily from the RC drill holes, of the overburden thickness and the mineralogy of the underlying basalt, alteration pipe and prospective sediments to judiciously interpret chargeability, resistivity and magnetic anomalies. Therefore Induced Polarization (IP) and magnetic surveys are planned prior to drilling. The geophysical anomalies can then be rapidly spot tested for mineralization by RC drilling, thereby further focusing any diamond drilling on significantly mineralized targets.

The RC drill holes were logged by Stuart Averill, P.Geo., and the DD holes by Dane Bridge, P.Geo., both of whom are seasoned mineral exploration geologists.

Split samples of the DD core, generally 1-2 m in length, were prepared at Tower's core logging facility at Tatelkuz Ranch near the Nechako property. Each sample was then prepared for analysis and analyzed at Activation Laboratories (ActLabs) in Kamloops, BC, a laboratory certified as ISO/IEC 17025 Accredited (Lab 790) by the Standards Council of Canada. The samples were analyzed for gold by fire assay and ICP-OES and for 37 further elements, including Ag, As, Zn, Pb and Cu, by ICP-OES using a four-acid, near-total digestion. Over-limit (>5 g/t Au, >100 g/t Ag, >1% As, Zn or Cu, >0.5% Pb) analyses were repeated using the same procedures but at a higher detection range. QA/QC samples including blanks and standards were inserted regularly into the sample sequence at a ratio of approximately 1:15.

Tower is a Canadian based mineral exploration company focused on the discovery and advancement of economic mineral projects in the Americas. The Company’s key exploration assets are the Rabbit North copper-gold porphyry project located between the New Afton and Highland Valley Copper mines, the Nechako gold project near New Gold’s Blackwater project and the More Creek gold project in the Golden Triangle area of Northern British Columbia.

Neither TSX Venture Exchange nor the Investment Industry Regulatory Organization of Canada accepts responsibility for the adequacy or accuracy of this release. 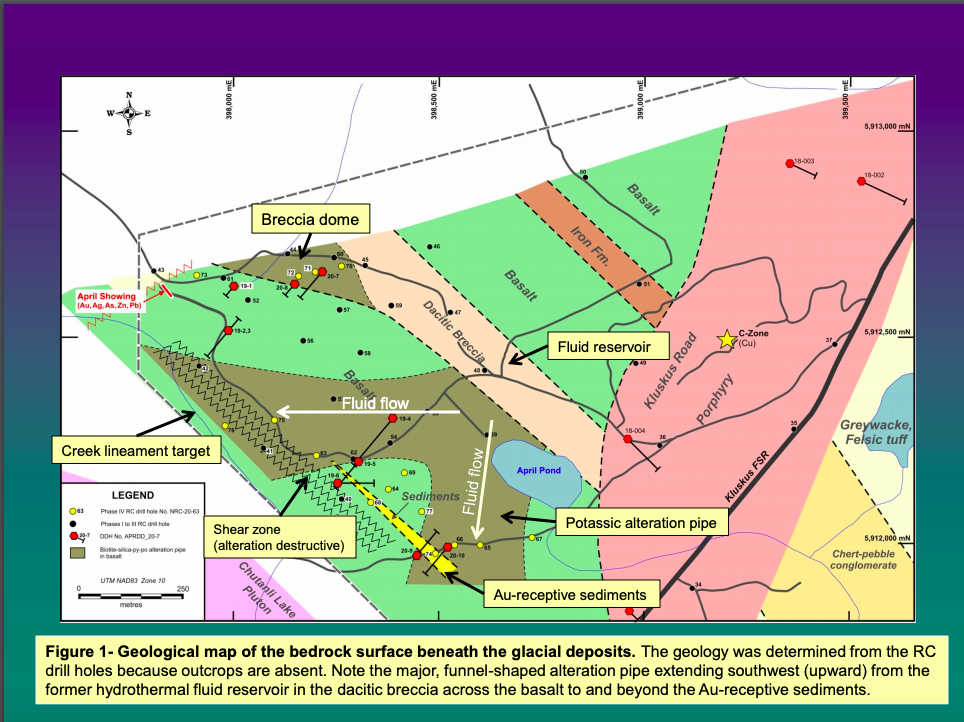 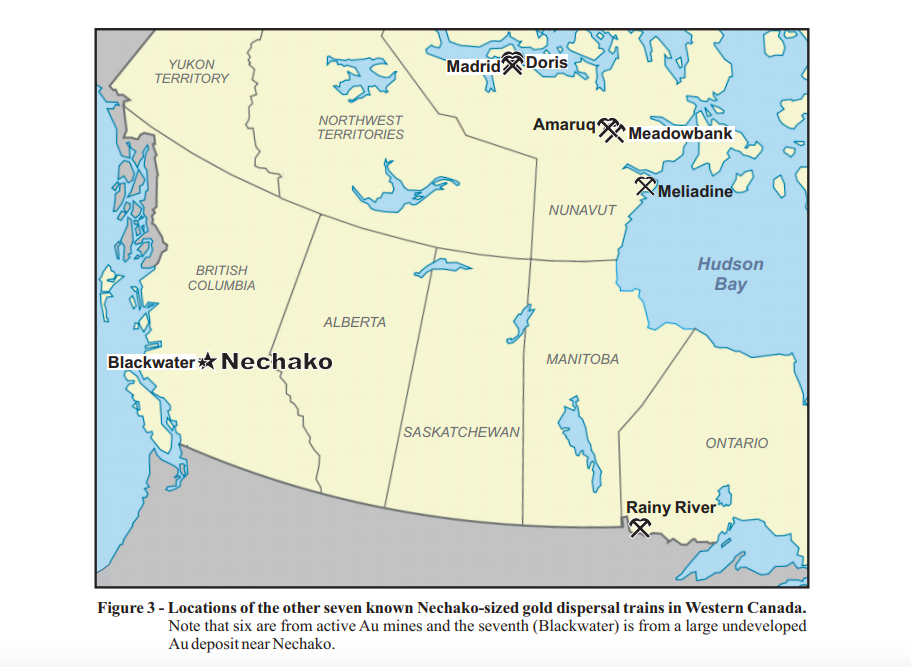 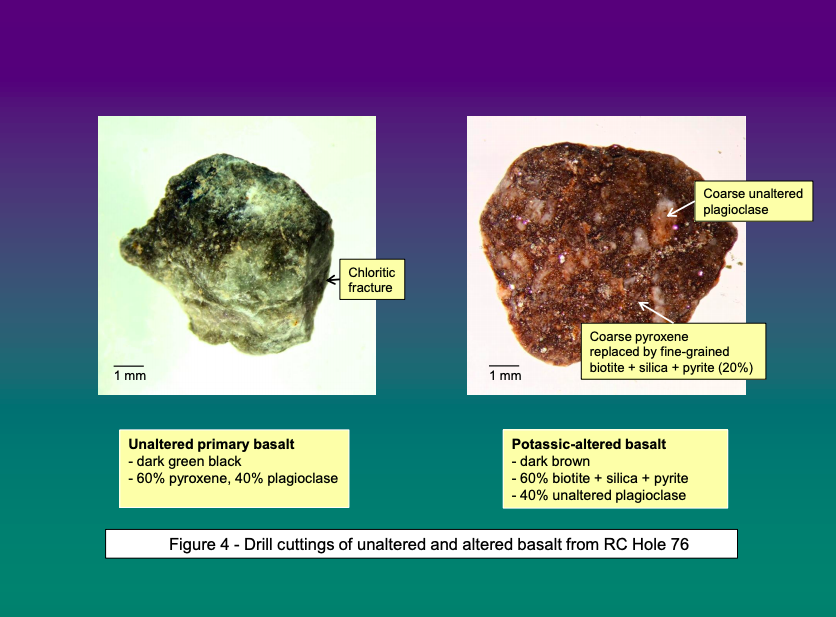