Tower Resources to Drill on the Nechako Property

The mineralized April Trend, which was first recognized in the Phase II RC drilling program, is inferred to be the bedrock source of the major, 1.5 km wide x 3 km long Au-Ag-As-Zn-Pb glacial dispersal train (Fig. 1) that was outlined in the Phase I and II programs (see February 14, 2019 press release). It is stratabound (Fig. 2), occurring at or near the contact between a tuff-siltstone-mudstone-limestone horizon to the west and structurally overlying basalts to the east (Fig. 3). Both the stratigrapic setting and Au-Ag-As-Zn-Pb association are suggestive of a volcanogenic, Eskay Creek-type deposit model.

Joe Dhami, CEO of Tower, commented: "We have identified a type of mineralization that is new to the Nechako property and is evidently of a significant scale of but only through the drill bit will we learn its potential. Having spent the last two years methodically tracking the Nechako gold dispersal train 3 km to its bedrock source, we are eager to begin diamond drilling."

The Phase III RC holes were drilled along the northernmost 500 m of the 1500 m long mineralized trend. Eleven holes, Nos. NRC19-52 to 62 (Figs. 1, 2), were completed in the three budgeted drill shifts, significantly exceeding the expected six to eight holes. The holes were sited 100-200 m apart and drilled vertically. Both the Upper and Lower (where preserved) Till horizons and underlying bedrock were sampled continuously over 1.5-2 m intervals (Fig. 3).

Holes 52 and 60 intersected a key extension (Fig. 1) of the westernmost of the two preserved segments of the Lower Till horizon that host remnants of the once-continuous, east-northeast trending dispersal train. The Au-Ag-As-Zn-Pb analyses obtained from the heavy mineral concentrates (HMCs) of the Lower Till samples from these holes and from nearby Phase II Hole 45 are the highest encountered to date. The average HMC Au values for all of samples collected from the Lower Till section (up to 8 samples per hole) rise progressively westward - i.e. glacially up-ice - from 1-1.5 g/t 2-3 km down-ice in the Phase I drill area to 2.1-2.4 g/t in Holes 45 and 60 (Fig. 3, Table 1). They peak at 4 g/t in Hole 52 immediately down-ice from the April Trend and then drop precipitously to less than 0.5 g/t 150 m further up-ice in Hole 42 (Fig. 3), providing a sharp cut-off to the dispersal train.

The bedrock intercepts from the new drill holes confirm that the source of the Nechako dispersal train lies within the mixed tuff-siltstone-mudstone-limestone unit on the west side of the April Trend but show that the Trend has a slightly more easterly strike (Fig. 2) than that previously projected (see April 29, 2019 press release). The tuff, siltstone and mudstone are extensively fractured to brecciated, have been recrystallized by thermal metamorphism, are sulphidized and contain abundant biotite indicating that they have undergone pervasive potassic alteration. The limestone member, which was intersected only in Hole 62, has been recrystallized and its contact with the siltstone is a skarn comprised of epidote, grossular garnet and calcic feldspar. In contrast, both the basalt along the east side of the April Trend and an ignimbrite horizon further east are unmetamorphosed, undeformed and unaltered.

The diamond drill holes will be collared over the basalt and drilled to the southwest across the tuff-sediment unit as depicted in Figure 3.

While the Nechako dispersal train is clearly derived from the metamorphosed and hydrothermally altered tuff-siltstone-mudstone-limestone horizon, the only sulphides encountered in the new drill holes that intersected this horizon are pyrrhotite and pyrite, mainly in Holes 53 and 62 where they reach a concentration of 10-15% with pyrrhotite dominant. Arsenopyrite, sphalerite and galena - the characteristic minerals of the Nechako dispersal train - are conspicuously absent from the bedrock in these holes, suggesting that the thickness of the targeted Au-Ag-As-Zn-Pb zone is considerably less than the 100-200 m distance between holes. However, given the considerable thickness of the dispersal train (Fig. 3), its high metal content and its persistence for 3 km down-ice, the grade x thickness value of the source mineralization is inferred to be significant.

Tower is a Canadian based mineral exploration company focused on the discovery and advancement of economic mineral projects in the Americas. The Company's key exploration assets are the Rabbit North copper-gold porphyry project located between the New Afton and Highland Valley Copper mines, the Nechako gold project near New Gold's Blackwater project and the More Creek and Voigtberg gold projects in the Golden Triangle area of Northern British Columbia. 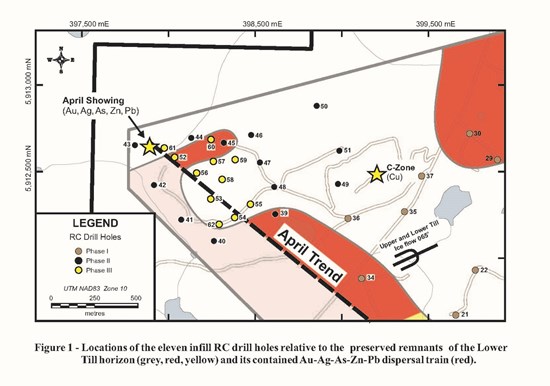 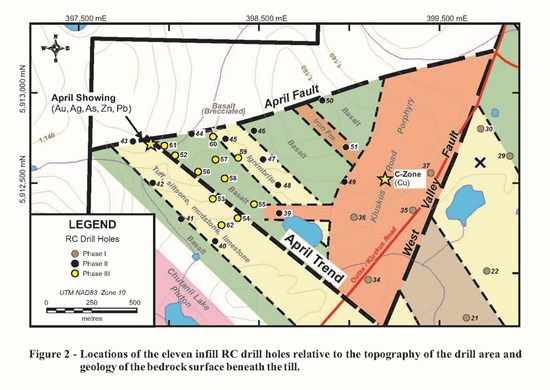 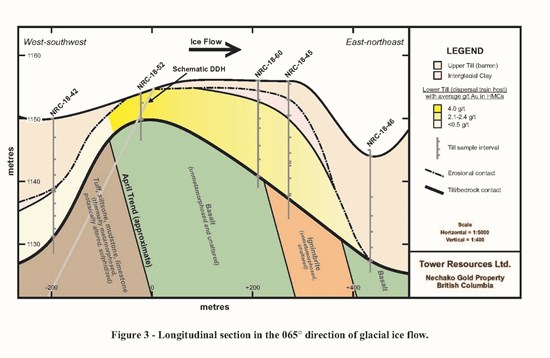 
Table 1 - HMC Au, Ag, As, Zn and Pb analyses from the Upper and Lower Till samples collected form the five RC drill holes shown in Figure 3.

To view the source version of this press release, please visit https://www.newsfilecorp.com/release/45677