Vancouver, B.C. – May 15, 2018 - Tower Resources Ltd. (“Tower” or the “Company”) is pleased to provide an update at the Company’s Nechako gold project in British Columbia.

In 2017 Tower contracted Overburden Drilling Management (“ODM”) to complete an investigation of the overlying tills at Nechako using their well established reverse circulation (“RC”) drilling and indicator mineral analyses. This program has successfully identified an area of highly concentrated sulphide grains in the tills, including pyrite, chalcopyrite and sphalerite that carry highly elevated grades of gold, silver, copper, lead and zinc.

“Historical exploration at Nechako by Placer Dome and Rio Tinto focused exclusively on porphyry Cu deposits. Tower’s 2017 RC program has demonstrated the potential for Au and Ag in an untested area of the property and has considerably narrowed the search for a new deposit. This represents an exciting new opportunity in the exploration of Nechako, one that we will follow up on with diamond drilling in 2018. Similar methodology has been successfully employed to discover a number of Canadian gold deposits including Blackwater (30 km southwest of Nechako), the Rainy River mine and the Casa Berardi mine in Quebec” added Garett Macdonald, President & CEO.

A total of 38 RC holes were completed at Nechako with overburden depths varying from 5 to 50 metres. Till samples weighing approximately 10 kg were collected from top to bottom in the till section in each hole, typically over 1.5 m intervals. A heavy mineral concentrate (“HMC”) was prepared from each sample to extract any available gold and sulphide mineral grains that had been dispersed in the till during glaciation. All HMCs were then analyzed geochemically for Au and other elements of interest. A large sulphide mineral dispersial train was identified in the till glacially down-ice from the Kluskus Road Porphyry (Fig. 1) and directly below a gold grain dispersal train identified in Tower’s earlier (October 2016) surface till sampling program.

At Nechako the Cu content of the sulphide-bearing HMCs mirrors the known low 0.05-0.1% Cu grade of this porphyry but the Au and Ag contents of the HMCs are much higher (typically 1-5 g/t, ranging up to 10 g/t) than anything known in or near this porphyry (Table 1). As at the Rainy River project, the till in the Au dispersal train is so enriched in sulphides that the HMCs are much larger than normal, significantly diluting the Au analyses. In order to compare the relative Au anomaly strength between sulphide-rich and sulphide-poor samples, all Au values over 500 ppb (0.5 g/t) were normalized to a standard 25 g HMC weight. To compare the anomaly strength between drill holes, a further adjustment was made for the number of anomalous samples per hole, similar to the grade x thickness calculation used in diamond drilling. Even without normalizing, however, the Au content of the till HMCs is two to three times higher than that of HMCs from an RC hole drilled on the Blackwater dispersal train 600 m down-ice from the centre of the deposit. During the RC program a large, new porphyry stock called the Blue Road Porphyry on the eastern part of the property was also discovered (Fig. 1). This porphyry has undergone pervasive argillic alteration (sericite + pyrite) and appears to be related to the smaller Kluskus Road Porphyry to the west. 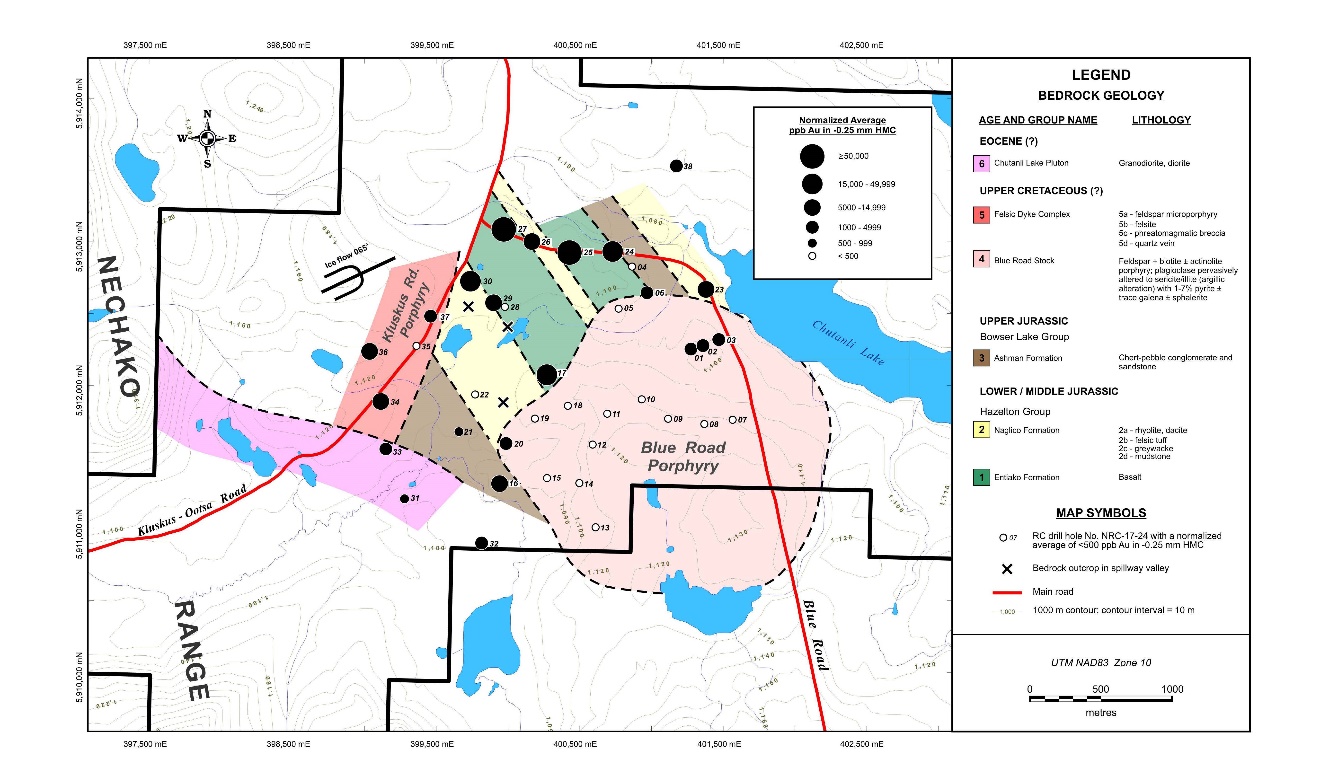 Figure 1 - Under-cover bedrock map showing normalized (for variations in the weights of the -HMCs) total ppb Au per drill hole in the -0.25 mm HMCs of all till samples in the hole in which the Au content of this fraction exceeded 500 ppb before normalizing.

The technical content of this news release has been reviewed and approved by Mr. Darrell Hyde, P.Geo., Exploration Manager for the Company and a Qualified Person as defined by National Instrument 43-101.

Tower is a Canadian based mineral exploration company focused on the discovery and advancement of economic mineral projects. The Company’s key exploration assets are the Rabbit North copper-gold porphyry project located between the New Afton and Highland Valley Copper mines, the Nechako gold project near New Gold’s Blackwater project and the More Creek & Voigtberg gold projects in the Golden Triangle area of Northern British Columbia.

On behalf of the Board of Directors,
Tower Resources Ltd.

Garett Macdonald – President, CEO & Director
(604) 558-2565
This email address is being protected from spambots. You need JavaScript enabled to view it.
www.towerresources.ca